Crop is an absorbing account of the 2011 Egyptian revolution - one that includes no images of the popular uprising itself. Filmed entirely within the offices of Al-Ahram, the country's largest state-run newspaper, the film is a series of carefully composed tableaux that expose the institution's functioning and the former regime's strict control over information.
A photojournalist, who missed the 18-day uprising because he was in hospital, provides voiceover narration. The film pushes the audience to think about the power of images. 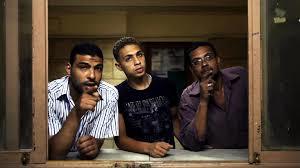