Egyptian Nationalism and its Discontents 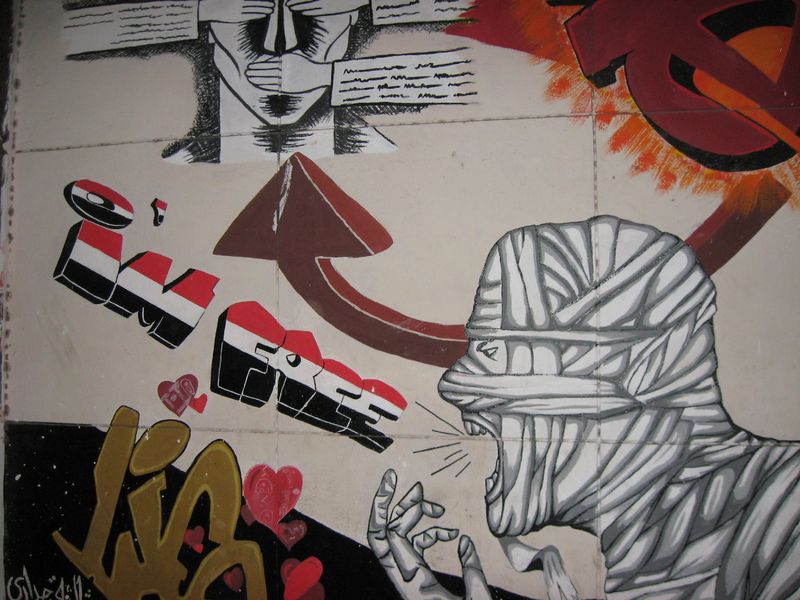 For many Egyptians, the 2011 revolution felt like falling in love with their country after decades of disillusionment. The revolution produced a new nationalist consciousness and nationalist ideas. From notions of what the nation could be to criticisms of how elites were misusing national wealth, it was clear that the idea of the nation was central to revolutionary mobilisation. The widespread presence of Egyptian flags points to this, as well as the imagery of ‘home’ and ‘homeland’ in songs and chants used during the revolution. At the centre of this, was contestation around who the nation belonged to, and what that meant for the future. Linked to this was the idea of the ‘Egyptian people’, who were uniting to fight against injustice. Nationalism was also mobilised by those seeking to take power, namely the military and the Muslim Brotherhood. These themes cut across various forms of popular culture.

Debating the Origins and Nature of Nationalism

During the period of European colonial rule, nationalism was mobilised in the service of anticolonialism and independence, further complicating the story of nationalism’s origins and effects. What is important to take away from all of these debates is the general agreement that the idea of the nation, national belonging and nationalism are all socially constructed and highly symbolic. Moreover, the idea of the nation and forms of nationalism change over time. Nationalism both includes and excludes; tracing who is being included and who is being excluded can tell us a lot about national political dynamics at any given moment.

Competing Definitions of the Egyptian People and Identity

Popular culture has been an important space through which nationalism and ‘the people’ have been interrogated in Egypt. Released during the 18 days of the Tahrir Square sit-in, Tamim al-Barghouthi’s poem ‘Oh Egyptian people’ puts forward a construction of ‘the people’ intricately tied to Egyptian nationalism through its revolutionaries, with martyrdom being a key trope. Cairokee’s song Ehna Elshaab (‘We the People’) criticises state-directed images of the people and the country. Instead, Cairokee evokes the idea of ‘the people’ that was widespread during the revolution, one based on unity around social justice rather than unity around narrowly-defined conceptions of nationalism, stability and security. In the context of violence and polarization, what is the nation and who belongs to it has been heavily contested in various forms of popular culture. Andeel’s cartoon entitled ‘Egyptian People’ is a clear condemnation of the violence that has permeated all levels of Egyptian society. It also suggests that Egyptian citizens have blood on their hands. On the other hand, Ali El-Haggar’s song, ‘Ehna sha‘b wintu sha‘b’ (‘We are one people and you are another people’), questions the place of the Muslim Brotherhood within the Egyptian nation. 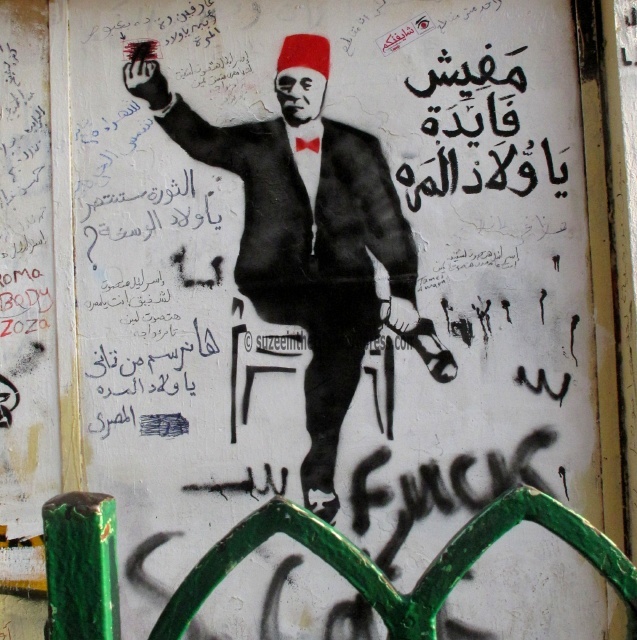 Different conceptions of nationalism and the nation were also reflected in the ways in which figures and motifs from Egyptian history, whether the pharaohs or Saad Zaghloul, were incorporated into popular culture. This was very clear in relation to graffiti. Competing representations of the nation reflect different ideas about Egypt’s identity. The return to a Pharaonic past, for instance, has long been part of nationalist stories in Egypt, as has been the centring of nationalist heroes such as Saad Zaghloul, who was one of the leaders of the nationalist movement against British colonialism. Interestingly, the revolution and post-revolutionary period also saw much contestation around Gamal Abdel Nasser, a significant nationalist figure. The importance of these different invocations is that they all symbolise a particular type of nation and nationalist subject. Is the ideal Egyptian a liberal nationalist or a radical, populist nationalist? How does this subject dress? What language might they speak? All of these characteristics change depending on which national history and which national figure is centred. 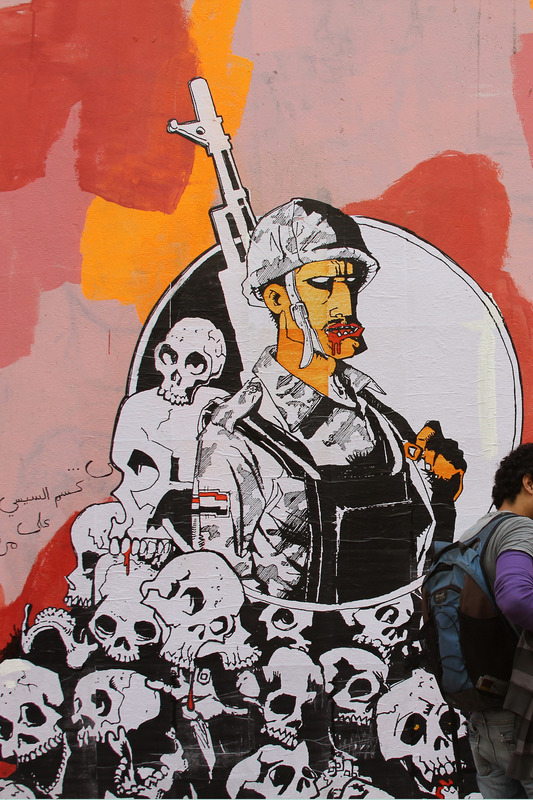 Who Protects the Nation?

The connection between the military and the nation was heavily contested in the post-2011 period. Historically, the Egyptian army has been viewed as a patriotic institution, that has protected the nation. During the 2011 uprising, the protesters welcomed the intervention of the army, which they saw as protecting them from the police, as expressed in the slogan, ‘the people and the army are one hand’. However, after the military came to power in February 2011, it was increasingly criticized. Cartoons, graffiti and songs condemning the army’s increasing violence became more and more commonplace. Whilst questioning the role of the army and its patriotism, nonetheless, popular culture often reproduced the assumption that the military was intimately connected to the nation, and thus should act for the good of that nation.

Under the rule of Muslim Brotherhood president Mohamed Morsi, there were increasing calls for the return of the army to power, again expressing the belief that the military is the protector of the nation. Following the coup that removed Morsi, the military regime explicitly mobilized nationalism to legitimize the new political regime. In this regard, in 2014, then newly elected President El-Sisi launched a project to extend the Suez Canal, which was to be called the new Suez Canal, and which was lauded by pro-government media as a ‘national triumph’. Yet, strong nationalist sentiment also backfired against El-Sisi in the case of the Tiran and Sanafir islands. After news broke that El-Sisi was handing over the Red Sea islands to Saudi Arabia, on the basis that the islands originally belonged to the Gulf state, there was uproar in Egypt, with large protests. Many viewed the move as Sisi giving away Egyptian territory. 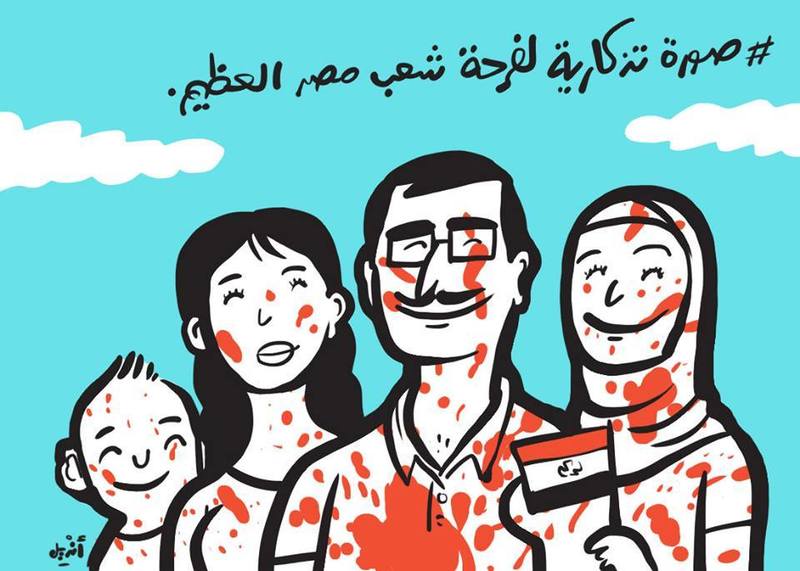 The Exclusionary Nature of Nationalism

Nationalism brings with it many forms of exclusion, the consequences of which the world continues to violently live with today. Egypt is no exception to this, with a society and state that is often exclusionary to religious minorities such as Egyptian Christians, as well as racial minorities such as Nubians. Moreover, many Egyptians deny the existence of discrimination or refuse to address it in the name of maintaining national unity and protecting the 'national fabric'. We can see representations of these exclusions in popular culture as well as important criticisms made of how the nation treats people differently.

One good example is the gendered nature of nationalism, and the ways in which it constructs the ideal national subject as a certain type of male. This in turn works to justify violence against women in the name of protecting the nation. The practice of virginity testing, for example, was used by the military to discipline and assault female protesters. It was defended through the logic of ‘bad’ women who were a threat to the safety of the nation (see the article on ‘women in the revolution’). Similarly, exclusions along lines of class, race, sexuality, amongst other axes of social difference, are central to the functioning of nationalism.

Abu Lughod, Lila (2004) Dramas of Nationhood: The Politics of Television in Egypt. University of Chicago Press. 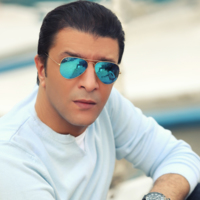 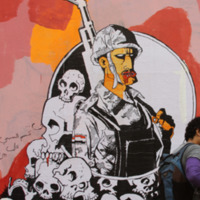 "Army above All" by Ganzeer 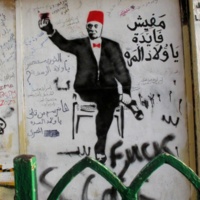 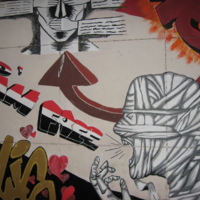 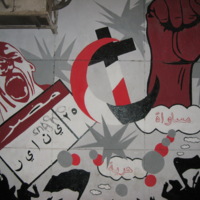 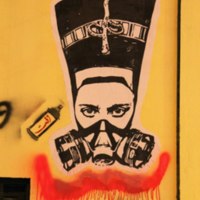 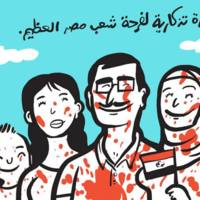 "Souvenir Portrait of the Great Egyptian People" by Andeel 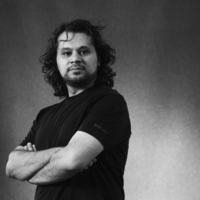 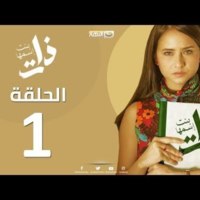